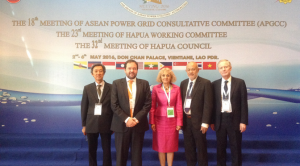 HAPUA Secretary in Charge reported to the Special SOME (held 26 January 2016, Kuala Lumpur) the conclusions from the AEMI Forum on Energy Security and Connectivity:  The Nordic and European Union Approaches.  The Special SOME requested HAPUA to provide more information on the market design, structure and operation of Nord Pool and the Southern African Power Pool (SAPP) as well as other similar electricity exchanges around the world.  SOME members further indicated that they would like to find out specifically how multilateral trading appears to have been implemented without full harmonization of regulatory and legal frameworks, or liberalization of national electricity markets.

In view of the request from the Special SOME, and in order to enhance the understanding of the operation and structures of Nord Pool and the Southern African Pool (SAPP), HAPUA invited the AEMI Initiative, along with Nord Pool Consulting, to present a paper on the power market model at work in each of these two cases, and to spell out the conditions for their creation and the requirements for their effective operation.  The presentation was on the Agenda of the ASEAN Power Grid Consultative Committee (APGCC) meeting, held on on 3 May 2016 in Vientiane, Laos PDR.

A delegation from the AEMI Initiative, along with Nord Pool Consulting, addressed the APGCC meeting, in order to:

Members of the APGCC were invited to the joint HAPUA-AEMI Workshop on 24-26 May 2016 in Jakarta, to discuss further various electricity exchange models; to agree terms of reference for a Feasibility Study to adapt such models to ASEAN; and to agree on the cooperative approach to deliver it, involving both ASEAN participants and international experts.