This AEMI Forum was jointly convened by the ASEAN Secretariat, the ASEAN Center for Energy (ACE) and Chulalongkorn University. The main objective was to foster a dialogue between the AEMI Group members’ findings from their academic investigations, and ASEAN policymakers working on energy at both the national and the ASEAN levels.

The presentations by the AEMI Group were based on seven AEMI papers, which served as a basis for the forum discussions. The papers covered the following themes:

The participants unanimously agreed to express their strong support for the vision of AEMI within the framework of the AEC. The participants unanimously recommended that, with technical support from the AEMI Group, further studies should be undertaken to develop an AEMI blueprint and roadmap. The studies would specify appropriate goals and steps for the short term (2015), medium term (2020) and long term (2030) at the national and ASEAN levels.

The participants further recommended that the AEMI Forum’s main conclusions be presented to the Senior Officials Meeting on Energy in Bali during September 2013, and to subsequently invite the ASEAN Ministers of Energy Meeting (AMEM) held in September 2013 to support AEMI. 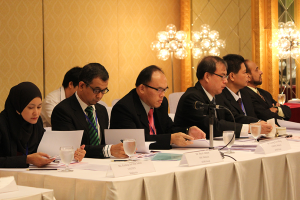 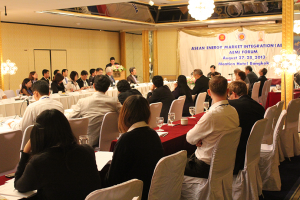