During their 34th meeting (September 2016), ASEAN Energy Ministers have envisaged the creation of an ASEAN Electricity Exchange (AEE), adapted from various models around the world, notably the Nord Pool and the Southern Africa Power Pool (SAPP).  In this context, they approved the creation of an APG Special Task Force to examine various models around the world, and advise on a framework for the APG to operate on a multilateral basis. The task force is within the Heads of ASEAN Power Utilities/Authorities (HAPUA) and chaired by the ASEAN Power Grid Consultative Committee (APGCC).

As part of this initiative, HAPUA and the United Nations Economic and Social Commission for Asia and the Pacific (UNESCAP) have jointly convened a Workshop 17-19 April 2017 in Jakarta, working closely with the International Energy Agency (IEA) and International Renewable Energy Agency (IRENA). The principal objective was to examine the different regional power integration models around the world, and to assess their applicability to ASEAN in the context of the Feasibility Study for the creation of the AEE.  The AEMI Group has provided support for the Workshop and drafted its Concept paper.

The Workshop was convened to provide an opportunity for members of the APG Special Task Force to engage in an interactive dialogue with experts from around the world, to find out more about regional power integration models, their strengths and weaknesses, and assess their suitability to ASEAN.  The key models include those in the European Union (EU), Nordic countries (Nord Pool), the United States (U.S.), the Southern African countries (SAPP), and the Central America (SEIPAC).  Furthermore, the Workshop examined findings from sweeping studies that assessed more than a dozen different regional power integration models around the world, and considered their conclusions and recommendations, with a view to developing an Outline for the AEE Feasibility Study.

Workshop participants included academics, experts from around the world, practitioners, members of the APG Special Task force, as well as representatives for the donors’ community and international organizations.  It was held under the Chatham House Rule, whereby participants are free to use the information received, but neither the identity nor the affiliation of the speakers, nor that of any other participant, may be revealed.

During their deliberations, the Workshop focused on three main questions: 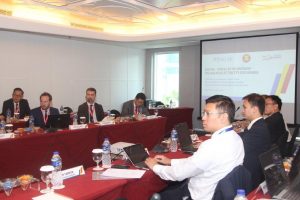 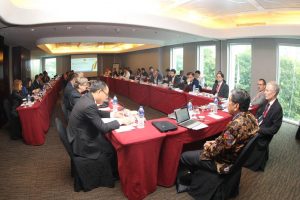 Note:  For your reference, these documents have also been uploaded onto HAPUA Website at http://hapua.org/main/activities/other-activities/ .

In addition, you could access the photos at http://hapua.org/main/2017/04/25/hapua-unescap-workshop-and-the-1st-meeting-of-special-task-force-on-the-asean-power-grid/