The main theme adopted by the ASEAN Plan of Action for Energy Cooperation (2016-2025) is “Energy connectivity and market integration”, and the ASEAN Power Grid (APG) is a key component of this vision. Whilst a number of bilateral grid interconnections have been constructed, no electricity trade involving more than two countries has occurred. The success of the Southern African Power Pool in adapting the experience of the Nordic Power Pool to local conditions shows that a regional power exchange can be created between power industries that have not been liberalised. This raises the question of whether an ASEAN Electricity Exchange could be created following the same approach.

If the approach were deemed appropriate, participants would then:

The Workshop was attended by some 35 participants, including energy officials from the ASEAN Center for Energy, ASEAN Power Grid Consultative Committee, as well as academics from ASEAN institutions.  Also present were experts from Nord Pool Consulting (Norway), Ricardo Energy & Environment (U.K.) and from the Embassy of Norway, Singapore. The ASEAN Secretariat participated as an observer.

Participants agreed unanimously that the creation of an ASEAN Electricity Exchange (AEE) would:

Regarding next phases for considering the creation of an AEE, participants agreed unanimously to recommend three phases, each providing a clear decision point before proceeding further:

Furthermore, they agreed that the core purpose of the AEE Feasibility Study is to allow ASEAN policy-makers to determine whether its creation would enable the APG to operate on multilateral basis by 2018, therefore allowing it to deliver the benefits it holds for ASEAN Member States (AMS).  Participants therefore:

Finally, participants recommended unanimously that HAPUA present the conclusions from this Workshop to HAPUA Member States, asking for their response, and to report to the next SOME on 12-15 July 2016 in Naypyidaw, Myanmar, that HAPUA will conduct the Feasibility Study for the creation of an ASEAN Electricity Exchange (AEE) to allow the APG to operate on a multilateral basis by 2018. 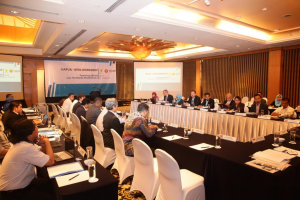 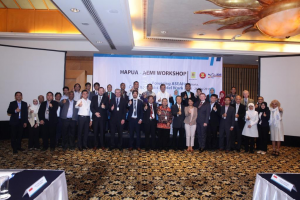